Inspired by Holly (see her Olympics blog post), who went to Vancouver from Seattle in one day with her husband and son, we decided to make the trek, too. We are definitely not naturally spontaneous people, so this was out of our comfort zone. I tentatively thought Thursday might work best for us, and on Wednesday gathered lots of good advice on TripAdvisor. That evening we decided we’d do it!

Late Wednesday night my husband and I both sent emails to our employers (good thing we are both working contract, part-time jobs right now!) saying we would not be available, and phoned the kids’ schools, leaving messages on the attendance lines that they would be absent. By the front door, we placed umbrellas, blankets, clipboards so the kids could do some school work in the car, spare Canadian money left over from prior trips, and passports.

The next morning, we were in the car by 7am, an hour later than we’d hoped, but typical for our family. Not surprisingly, our teenager slept much of the way there and back.

We stopped in Birch Bay at an Olympics store and I bought a fairly loud USA cloth shopping bag, and one son bought a hat. We wanted to represent our country in these small ways!

There was no wait at the border, we drove right up to the booth! Continuing on to the River Rock Casino in Richmond, we entered the multi-story parking garage, and noted fluff scattered on the ground due to those patriotic country flags people have fastened out of the car window scraping gouges in the low-ceiling insulation.

Memorizing our parking spot number, we entered the building and paid the $2 parking fee with our credit card at a machine. We walked over a plush skybridge, into the plush lobby, and down a CURVED escalator that prompted a photo-taking moment, used the very clean, tiled restroom, bought snacks, then back over the skybridge to the Skytrain station right off the parking garage.

Hubby Kurt easily figured out how to buy one-way tickets (under $4 Canadian, each) at the machine, then we each inserted our tickets to be validated, and hopped aboard. Already, some people had to stand, and as the train stopped, it got more crowded. We heard a German conversation, and a French conversation. The mood of the crowd was light, upbeat, anticipatory, and friendly.

We disembarked at the waterfront, and found multiple official, name-badged information attendants on every block, ready to give directions and distributing large street maps left and right. Sides of buildings had large screens with tv coverage of the Olympic events.

Here I am with my 3 boys, on our way to see the flames in person! (hubby was taking the picture) 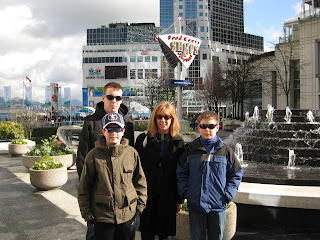 Near the cauldron, two attendants, each seated like beach lifeguards atop platforms with an umbrella, used megaphones to state in English and French, the directions to the line in order to walk up the platform to see an unobstructed view of the flames. At sidewalk level, there was a plexiglass panel with chain link fence above it through which we could see the cauldron. 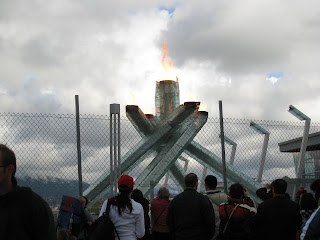 Everyone was posing for pictures everywhere, and trying not to cross in front of photos being taken. I offered to take the pictures for a couple of people, using their camera, so they can have shots with their friend.

We got in the back of the cauldron platform line, which moved in stages every 15 minutes or so. People were very polite except somehow this obnoxious family, draped in Canadian flags, and joking loudly about drinking, stepped in line a few groups ahead of us. We never did figure out if someone was holding a place for them or if everyone else was just too shocked and wimpy to say anything. Oh well, I don’t want to spend any time being aggravated about others’ rude behavior. After 45 minutes we made it to the top, just as the wind kicked up and a few sprinkles fell, and hubby took way too long taking way too many photos – the official had to tell him to keep moving along! I was surprised to feel the heat from the flames from so far away.

Here’s the view from the top: 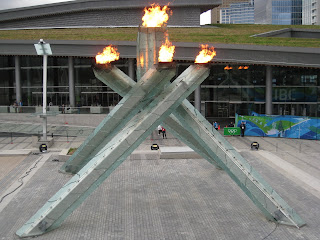 We found the food court directly across the street VERY crowded, but the Sinclair Centre food court, at the corner of Hastings and Howe, quite manageable with tables and chairs available. We had lunch of burgers and fish and chips and then walked the city, marveling at the joyous mood of pedestrians, the buoyancy of store clerks, the multitude of Canadian flags hanging out of windows, along with a few of other countries, the colorful face paintings and clothing of fans, and the occasional chanting of groups.

A few blocks away, we found the Olympic countdown clock and a very polite line, seemingly impromptu, of people waiting to sit in the bobsled to take a photo. We witnessed a very long line and figured it was people waiting to try the zip line two at a time high above the square full of folks watching the ice skaters and listening to live music. An elderly Canadian woman, arm-in-arm with a friend, stopped me, confirmed that I was from the United States, then gave each of us a new Olympics Canadian coin! She seemed excited to see everything and the pair blended into the crowd before I could take their picture.

With pre-teens and a teenager all very interested in tech stuff, we walked to Yale Town, through the Yahoo center, and into the Samsung and Acer tents set up with hands-on viewers, computers, and tvs. With pulsing music and moving lights, the tents were essentialy big product commercials, but still very exciting. The Coke tent’s line was hours long we heard. The open square had a stage and humongous screens showing the mountain events going on. We bought beverages and headed for the very high, very long bridge to Granville Island. There were country flag decals along the bridge’s sidewalk. Good thing I brought our little flag book to confirm their identification!

Here is the view from the bridge. 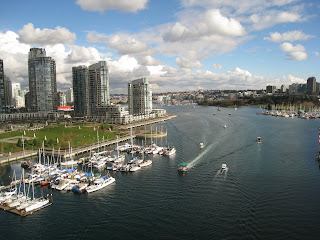 Our teenager spent 5 minutes meeting some friends who live in Vancouver. It’s all the time we had. Near a display showing an overview of the athlete’s housing that is blocked from public access, we were guided along by friendly attendants, and took a free, brand-new streetcar to the Skytrain station. There, we again used a machine to purchase new one-way tickets for each of us, and rode back to the parking garage at the Bridgeport station at the River Rock Casino.

So glad to be seated in the car – our legs and feet were so tired! A little while later, we again drove right up to the border booth, reentered the US, stopped at Dairy Queen for dinner, and were home by 7:00pm. The entire trip, including food, public transportation, parking, and gas, was under $150. I am still amazed at the details – the signage, the attendants helping everywhere, the positive energy of the residents and the tourists alike.

Later that night, my hubby and I put our hands on each other’s shoulders and exclaimed, “We did it!”