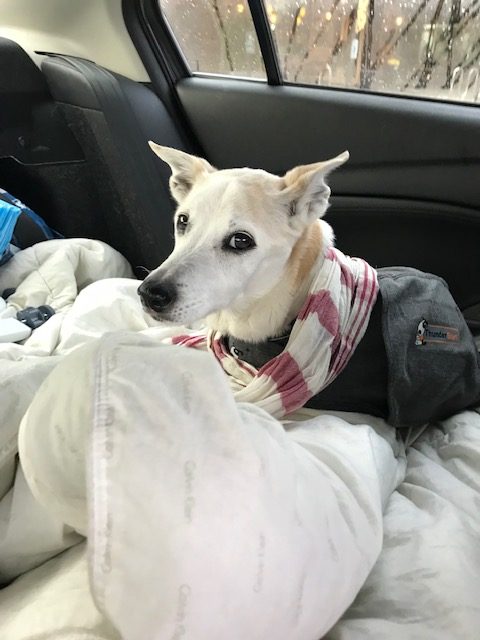 Like many other Americans, one of our beloved family members comes with four legs. And in our particular case, this furry creature is in her dotage at the ripe age of 15. This can pose dilemmas for frequent travelers:  do you leave them behind, will the caregiver manage their eccentricities, will they run away, and what really happens in critter air cargo anyway?????

Such was our dilemma this last year; fears of leaving her behind with one of our kids while her longevity was tenuous seemed all around unkind. We had recently made two fearful trips to the vet with Frances where sad diagnoses and prognoses had been made.  Sympathetic looks had been passed by veterinary staff and we thought we knew the inevitable was coming.

And then it didn’t.

Franny bounced back; the disease slowed. Senility seemed to reverse and the eve of our trip arrived. We should have been ecstatic but this is the dog that would vomit in the car on the smallest of errands. She hates the car!  How was this going to work?  My husband was convinced she was still near death and ever practical determined that we should bring along a spade. That seemed a bit much so after further consideration we left the sad tool at home.  Instead, we packed Franny and her favorite comforter in the back seat and away we went. Then a miracle happened, she curled up and went to sleep.

No Room at the Inn

Driving off into the sunset with man’s best friend is all well and good in theory, but finding a place to lay your collective heads is another matter. This trip was an exercise in spontaneity as such we never knew exactly where we would end up each night. It is probably important at this point to add the scope of our adventure for clarity sake. Our master plan was to travel Route 66 in reverse from Santa Monica ending naturally in Chicago and then driving on to New York City from there. And, to add to this odyssey, we were starting in Seattle which meant driving down the west coast before ever reaching Santa Monica in the first place. (It could be said that we have too much time on our hands.) Many unknown hotels lay out in front of us. We did not have a single reservation.

It became our habit to start searching for a bed around 7:00 pm each night. We would use various sites including Expedia, Hotels Tonight and so on. We had two criteria: parking (problematic and expensive in large cities) and pooch friendly. After hunting down a few reasonably priced hotels we would then go to their respective websites to see if they allowed pets–most of the time it was a “no.” If your pet was allowed and was within their weight allowance if noted, we would then calculate the charge for the dog which was anywhere from $0.00-$125.00 along with the parking fee if necessary. Suffice it to say the best deal was not always obvious until all the math had been completed.

One night, we found ourselves in a tiny road side town with the next stop  another exhausting hour away. As luck would have it one of the three motels took pets for just a $10.00 fee and it was only $22.00 a night. A great deal, what could go wrong?  Well, the paper thin walls could not muffle the sounds of human tragedy that inhabits cheap hotels at night. Suffice it to say emergency folks were contacted at around 3:00 am, chaos ensued, at 5:30 am we gave up on the idea of sleep and headed out. Franny has become deaf in her dotage so of the three of us she was the most refreshed. Unfortunately, she cannot drive.

Our subsequent stays were not nearly so eventful! The next night we stayed at ________________ which seemed to be made for pets, including a dedicated dog run. Our most luxurious of stays occurred in Chicago at the Athletic Club where they do not charge for pets at all and greet you with a gourmet doggy cookie. Due to the no charge pet policy, it ended up costing us less to stay here than the few other more modest hotels that allowed pets but charged an exorbitant fee. A complete list of hotels will be at the end of this post should you wish to emulate our experience–cannot imagine there will be any takers.

The End of the Road

We ultimately made our way to NYC with our dog dictating accommodations. For 2 1/2 months we remained in the city with our aged pooch in the tiniest of studio apartments. We visited dog runs, pet stores, joined a dog club all things that we would have never done had we not taken our Franny girl with us. She lived on to return home to Seattle with us along the much more direct route of I-90. The spade was never regretted.  In fact she lives to this day having had a resurrection of sorts after her trip. Our veterinarian was shocked at her weight gain and increased enthusiasm.  She is now nearing 16 and planning her next road trip!

Posted in Blog
← Cherry Blossom Festivals for Families“Another year over, a new one just begun . . .” Travel Post-Covid: What have we learned? →