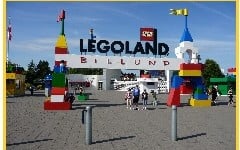 Sandy and her family visited Legoland Denmark in 2008.

Getting to Vejle or Billund, Denmark:

When we traveled, Billund had a nearby airport, but the closest Legoland hotel was out of our price range, and other hotels would have required a car. We were traveling from Copenhagen without a car. So we opted to take a train to Vejle and then a bus to Billund on the day of our Legoland visit. Vejle is very walkable, we walked to our hotel from the train station. Though there are van-sized taxis available, which the hotel arranged to take us to the train station for our departure. Vejle has many shops and restaurants close by.

We took our half-hour bus from Vejle to Legoland in Billund, (see hotels to sleep 5, 6, 7, or 8 in Vejle and Billund, Denmark) and arrived 45 minutes before opening time. When the gates opened – there was a crowd! Grab your first chance to take a photo at the entrance, though families politely wait their turn.

Notable Differences from other Legolands:

This Legoland has an old-fashioned Wild West area with ‘saloons’ and very un-p.c. Native American teepees with an actual fire over which kids can roast bread on a stick! Another surprise is that parents smoke all the time, in every area, and many men go shirtless. This Legoland also had a lack of benches – there was never a sitting spot where I could wait while hubby and kids were on a ride. My last complaint – the food lines were VERY long and the tables were scarce. Thank goodness there were 5 of us, so 2 could stand in line to order the food and carry the trays, and 3 of us could hover while other families finished eating and we could then snatch a table. Dogs are also allowed, and there are water bowls out for dogs in various spots, made out of Lego!

Amazingly, as in Germany Legoland, shelves are provided for holding backpacks and shopping bags while you ride a roller coaster. Apparently, there isn’t any danger of thieves – the shelves are not monitored or locked. No crime, I guess!

Miniland had a Skandinavian focus, and included large energy-company displays, as the utility is a sponsor.