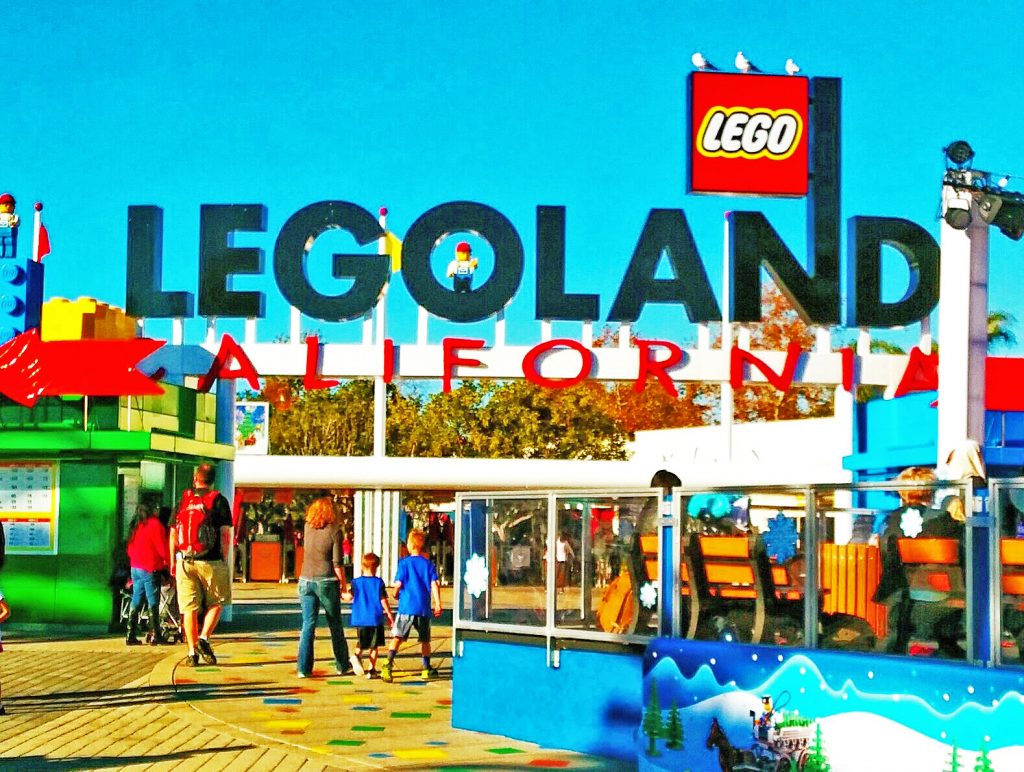 Going to Legoland during the holidays offers more than expected! We visited Legoland California, which is near San Diego, just after Christmas.

It was our fourth time at this Legoland (we’ve also been to Legoland in Germany, Denmark, and in Windsor, England). But it was our first time to visit at the holiday time of year.

See the Legoland website event page for the exact dates of the holiday decorations and special activities. They’ve even added an ice skating rink!

It was so exciting to see all the decorations, including a bit of fake snow blowing, and many tiny Santas placed all around Miniland! The buildings are adorned with garland, wreaths, swags, and ribbons.

Some trees have the customary globe-shaped shiny ornaments hanging from branches. And some large trees have giant Lego blocks attached to them in ornament fashion. There are also life-sized holiday figures, such as Rudolph, made of Lego for picture-taking opportunities.

Our teenage boys were 16 and our oldest was 21, but they all wanted to see Legoland again. It did not disappoint.

Below are eight of the Legoland areas, festive with holiday decor. Some of the Miniland scenes include a Santa or two (or many!). See if you can spot the Santas and Rudolphs at Miniland.

The last one, #8, is of the arena set of the firefighter show at Legoland. The stage area, as most other parts of Legoland, included holiday decor that hung from the building and trees.

1. New York Miniland – Santa and his sleigh flying near the MetLife building. 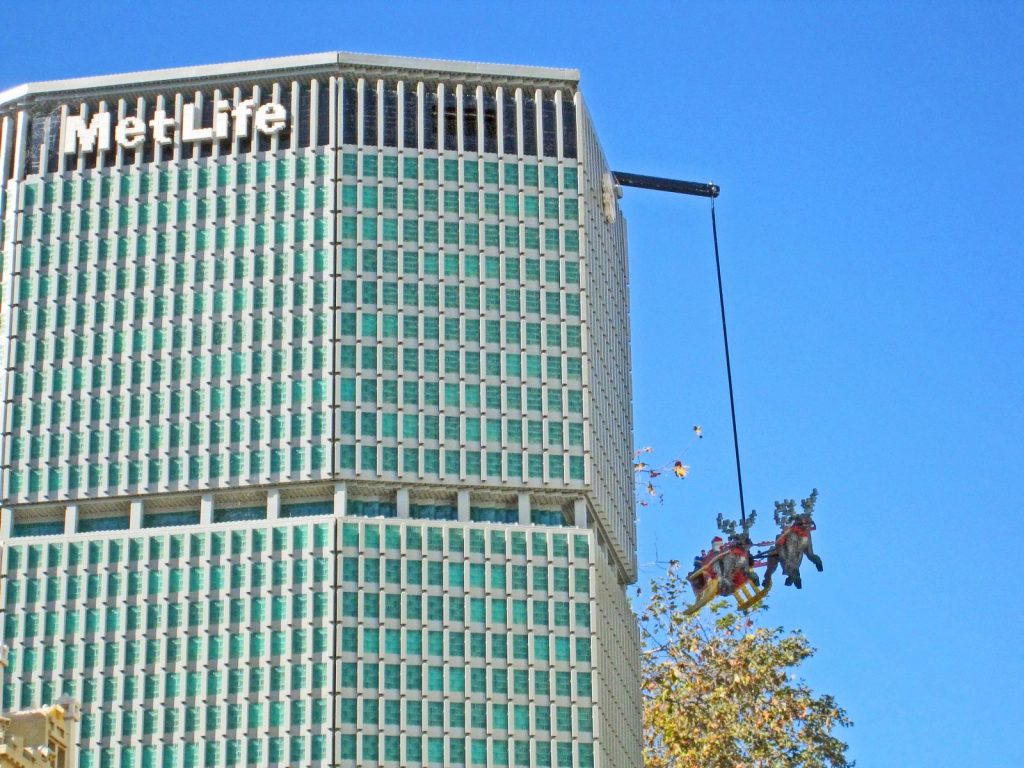 2. New Orleans Miniland – many Santas at a Santa convention. 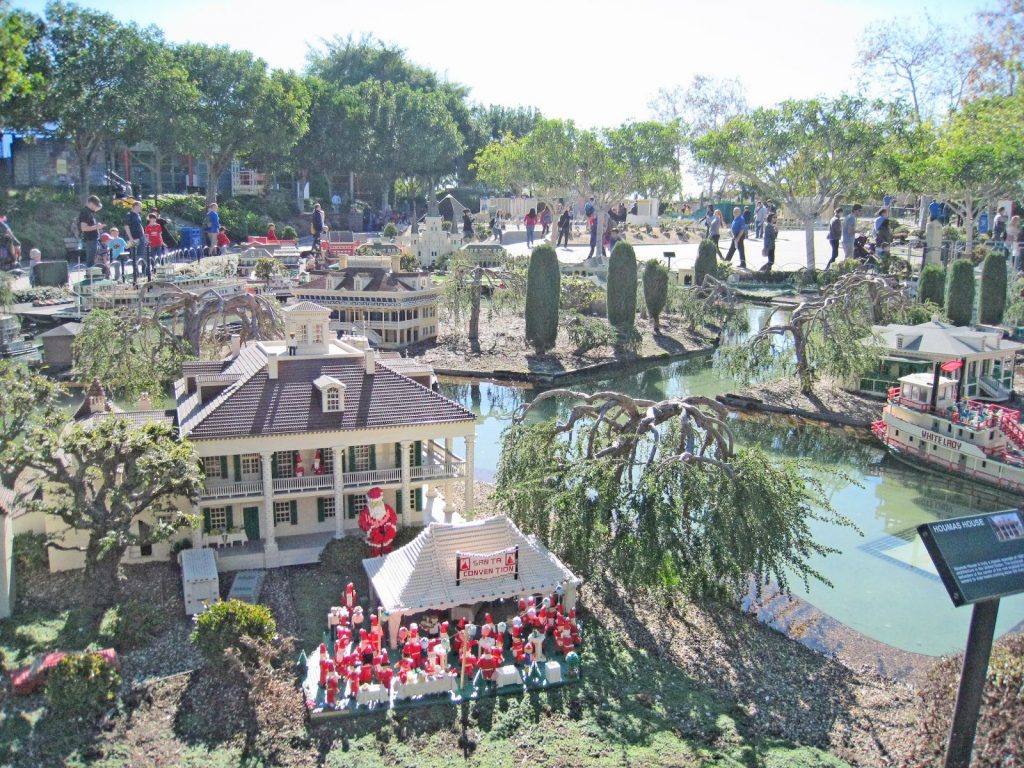 3. Beverly Hills Miniland – Santa and his sleigh on a rooftop. 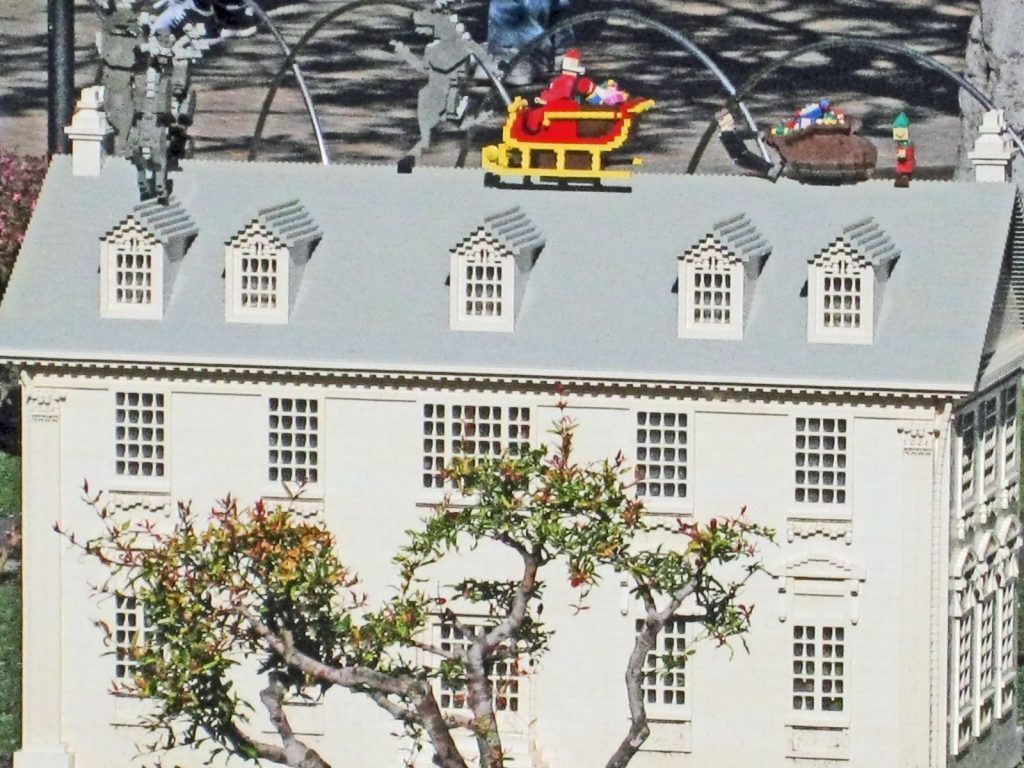 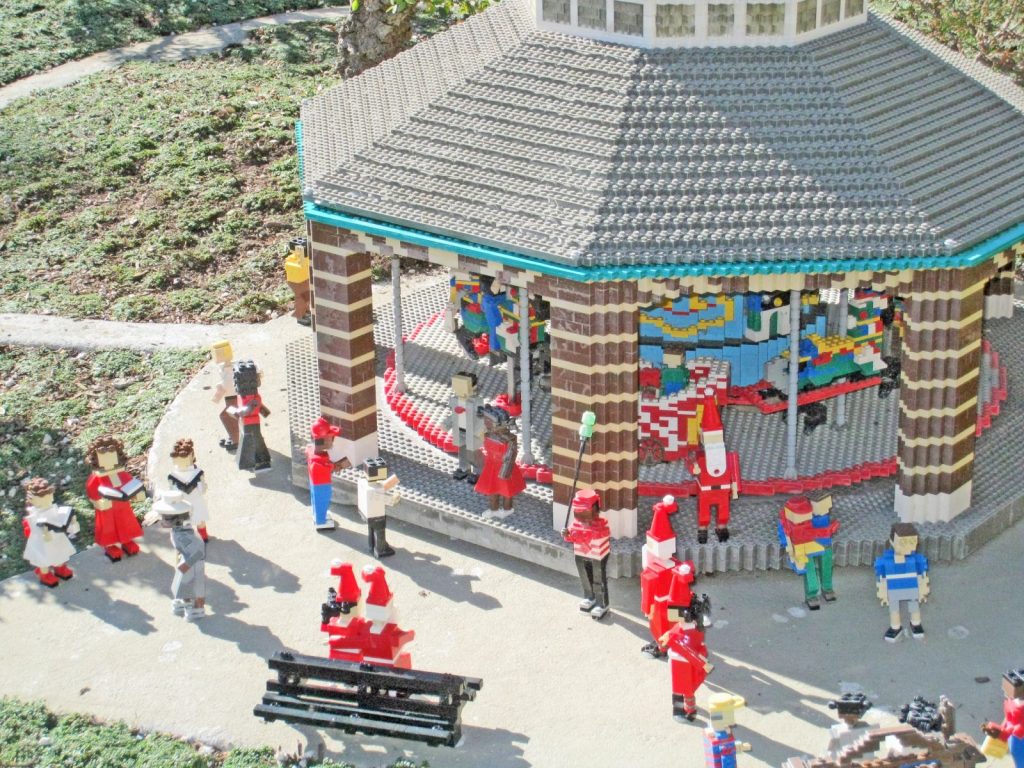 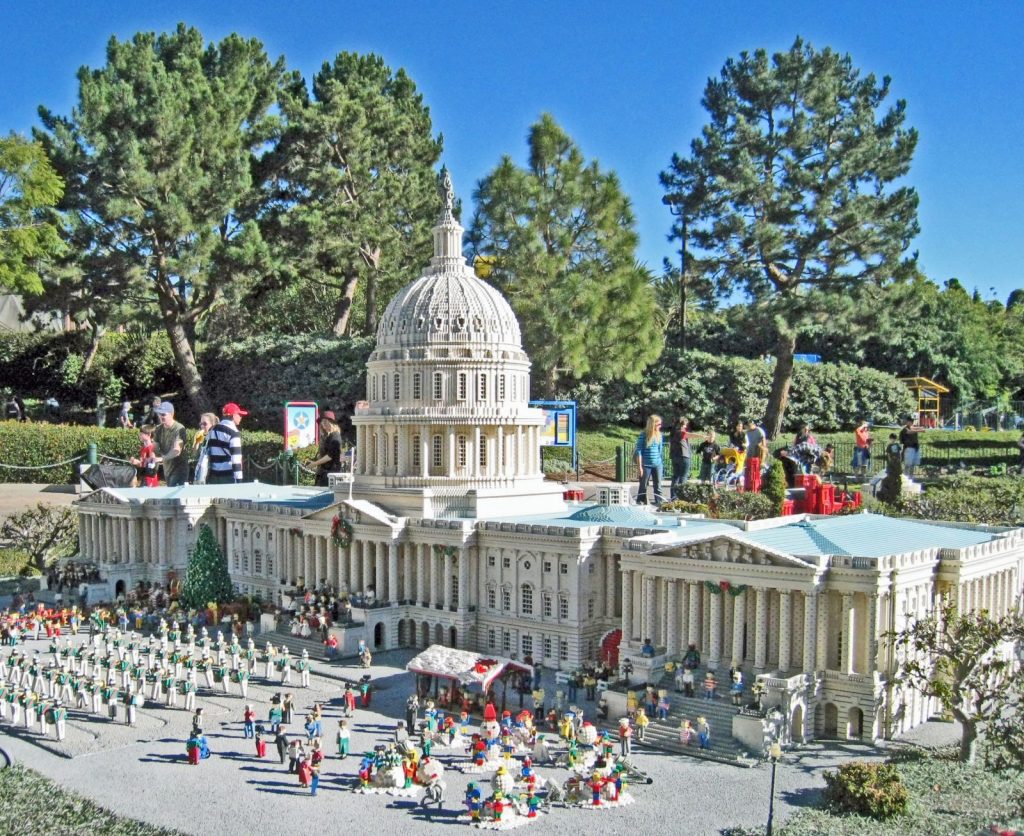 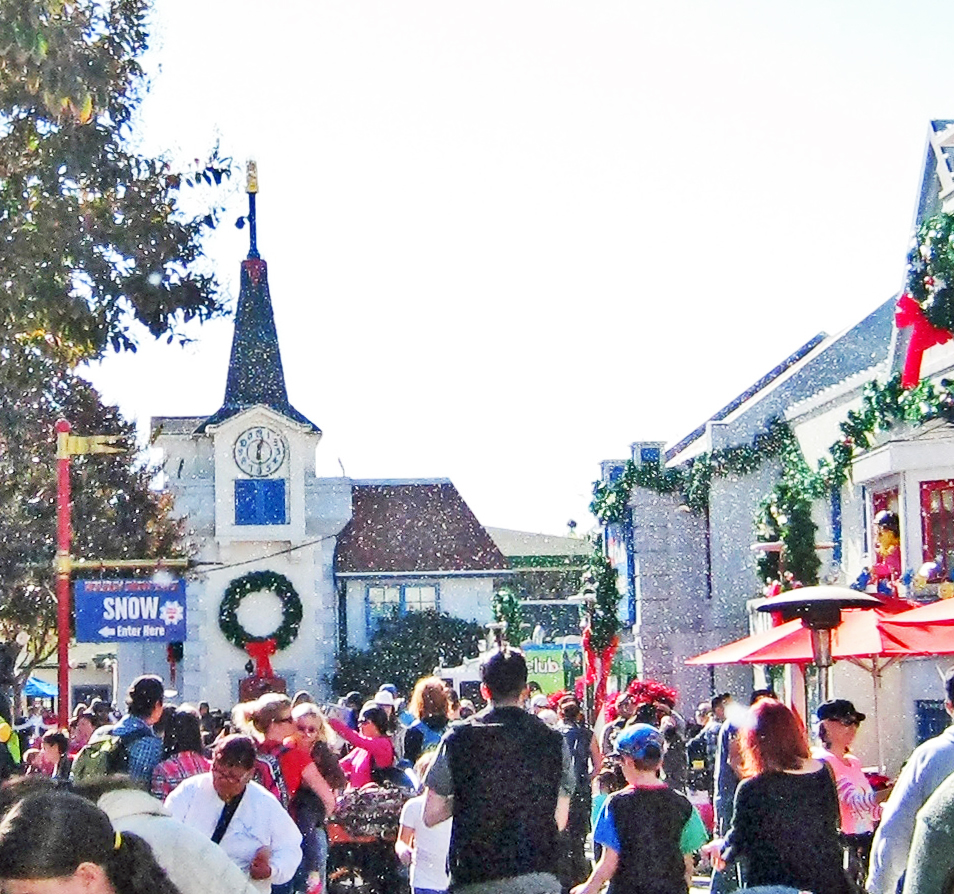 This show is so fun, we’ve seen it every time we’ve visited Legoland San Diego. At Christmas, the set includes a decorated Christmas tree, and wrapped gifts are incorporated into the act. I often find myself fondly remembering the catchy tune from this show!

The photos are of the outdoor set and stage area. Seating is semi-circular, with amphitheater-style concrete benches. 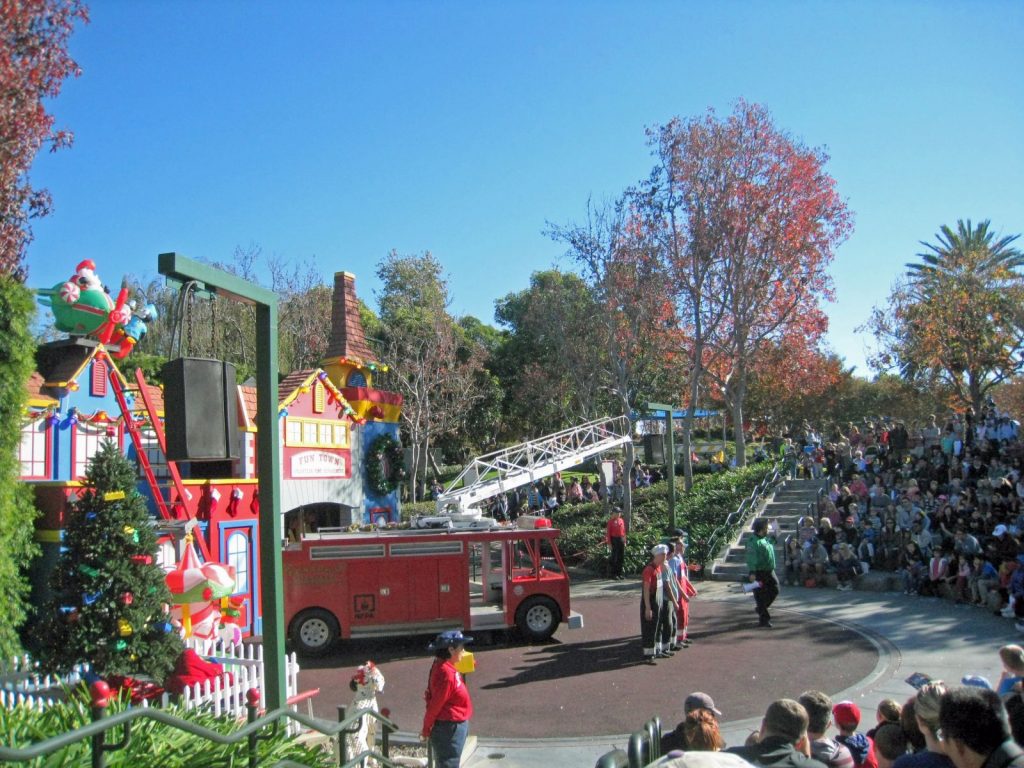 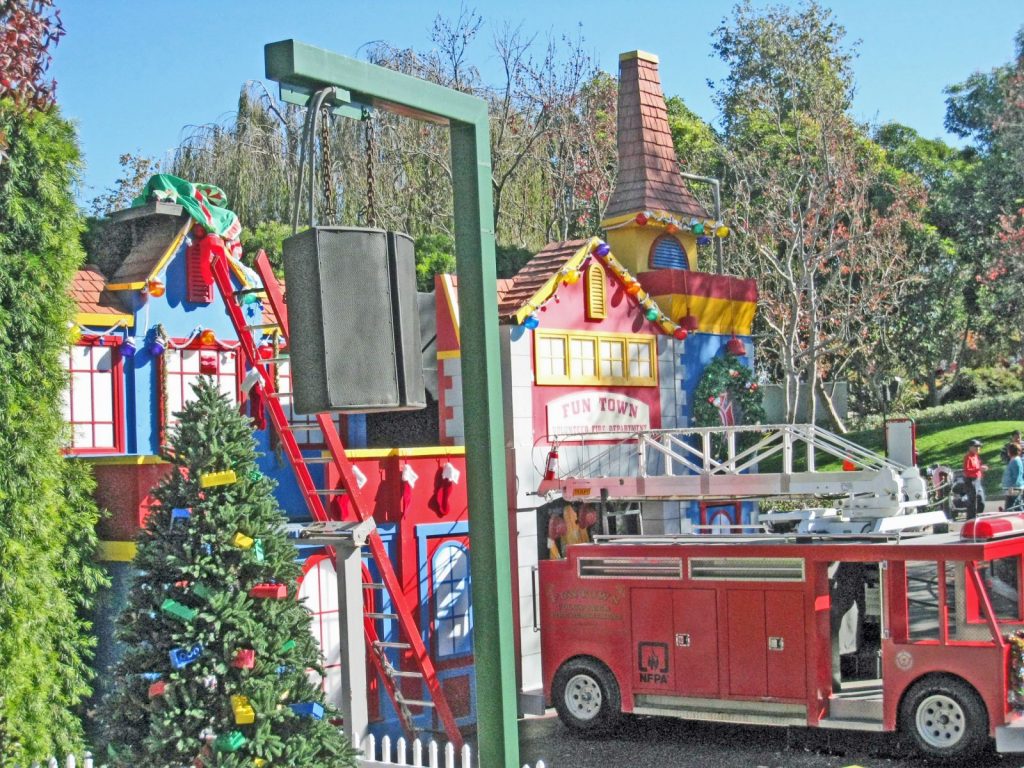 (Affiliate link – at no extra cost to you, using TripAdvisor through the link may result in a small commission to Sleeps5.)

Hotels with Family Room for 5, 6, 7, or 8 in Vejle, and Billund, for visiting Legoland in Denmark.

In Denmark, Legoland is in the city of Billund. Nearby is the city of Vejle, which makes a good base for visiting Legoland. Vejle offers additional accommodations and a small central area of shops and restaurants. It also has a train station for arriving from elsewhere, and a bus system to Legoland Billund if you don’t have a car.

Hotels with Family Room for 5, 6, 7, or 8 in Gunzburg, for visiting Legoland in Deutschland, Germany.

In Germany, the large Legoland theme park is in the small town of Ausfahrt. Nearby is the town of Gunzburg, which has a sizable center of shops and restaurants. Gunzburg is a good base for visiting Legoland. You can get to Legoland from Gunzburg by a 40 minute bus ride if you don’t have a car. (Germany also has smaller in-city Legoland Discovery Centres.)

Hotels with Family Room for 5 or 6 near Windsor, for visiting Legoland in Windsor, England.

In England, the large Legoland theme park is about a 20 minute bus ride out of Windsor, or maybe a 10 minute drive by car or taxi. When we visited Legoland Windsor, we did it as a day trip from our hotel in London. We took a train to Windsor, then caught the Legoland shuttle bus across the street from the train station. If you have a car, there are a few hotel large room options in the Windsor vicinity. (Like Germany, England also has in-city, small Legoland Discovery Centres.) 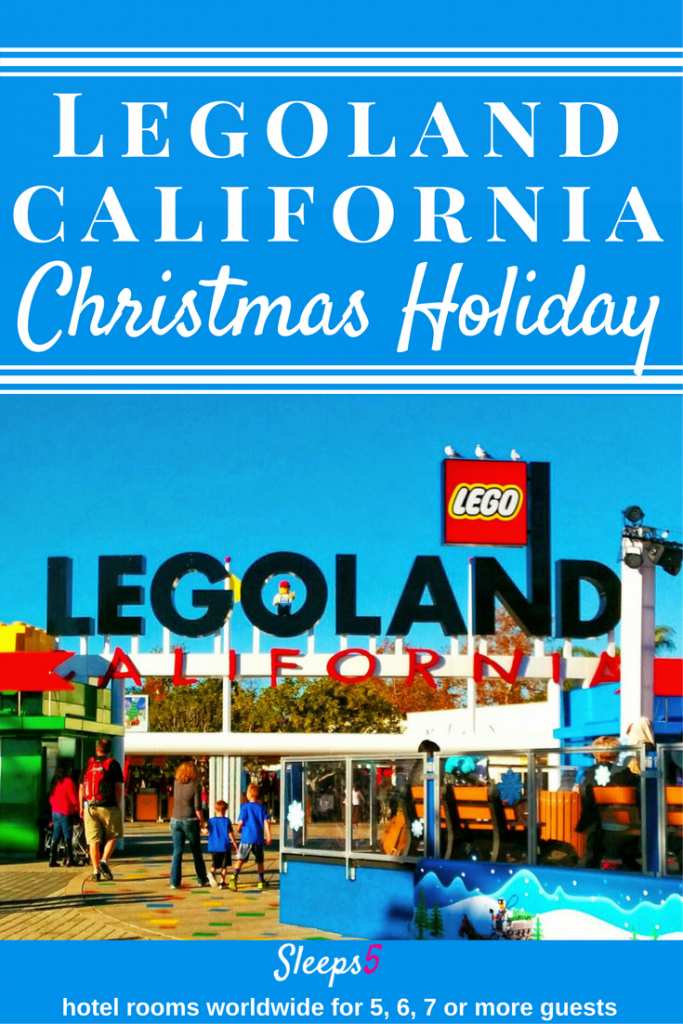 Affiliate disclosure: Sleeps5 provides links to products or services that may interest you. At no extra cost to you, viewing or buying via a link means Sleeps5 may receive a commission. As an Amazon Associate Sleeps5 earns from qualifying purchases.
See our full disclosure policy.

This site uses cookies. To consent to the use of cookies and continue viewing this site, scroll down or click the 'I accept' button. Find out more.